In no particular order, here are the 10 dumbest things I’ve seen an undergraduate chemist do in the last decade or so.

1. Derive a bond-length longer than the Humber bridge

This is a fairly common error that results from not keeping track of your orders of magnitude properly. If you’ve got a lot of 10-19 or 108 type things flying around, it’s easy to get lost. But, you should at least be able to sanity check your answer and figure out that a chemical bond is about an ångström  long, with comparatively little variation – it’s not going to be 8,000 metres.

There’s plenty of theoretical dumbness where this one came from, but they’re boring to non-specialists and would take a while to explain. The rest of this list is pretty much the horror-show that is the teaching laboratories.

2. Stab themselves with a pipette full of chloroform

It turns out that while we’re pretty careful about needle-stick injuries (one a week for postgraduates, none at all for undergraduates, remarkably) it turns out that a simple Pasteur pipette can be equally capable of breaking the skin and injecting a toxic compound into you. This is probably at the more sensible end of the “how the shimmering fuck did you do that?!?” scale.

Let’s just summarise this one thusly:

**throws a beaker of clear liquid in their friend’s face**

Student A: “Haha! Lol. It was just water… Joke’s on you! Wait… wait… why are you screaming?”

Not pictured – the shouting… the glass breaking… the demonstrators head-desking after being asked “can’t you just tell us the answer?” for the fifteen time that day

What’s the fastest way of emptying excess water from an ice bath? Easy – simply stick in some rubber tubing, suck it up, and and let the syphon action do the rest. Sounds great… unless you failed to spot someone spill some toxic crud in there earlier, and then sucked it into your f**king mouth. The end result of this one involved screaming across the lab to spit it out into the sink, right as the senior demonstrator turned up.

While we mostly work with metal heating blocks now (possibly for this very reason) it’s still common to use oil baths to warm things up. Even for a distillation. The trouble with a distillation is that you need to get everything else on the heated side of the condenser to get hot, and this takes a while. So you can speed it up by heating the still head yourself, and this often involves a heat gun (aka, a hair dryer).

This is fine, providing you don’t point it down into the oil bath, where a sudden blast of hot air hits the hot oil and sprays it everywhere.

They’re queuing up outside. The cleanliness has mere seconds to live…

6. Getting capsaisin in their eye

The first rule of Extracting Capsaisin Club is: you do not touch your eyes while extracting capsaisin!

The second rule of Extracting Capsaisin Club is: YOU DO NOT TOUCH YOUR EYES WHILE EXTRACTING CAPSAISIN!

It’s a very effective method of getting closely acquainted with an emergency eye-wash station, though.

Normally, this would be considered a sympathetic accident. Call first-aider, and get them checked out.

However, when the lab starts at 10 am, and it’s because they skipped breakfast, possibly sleeping in despite not going out the night before (they said) it’s their own damn fault and they’re a god-damned danger to others. 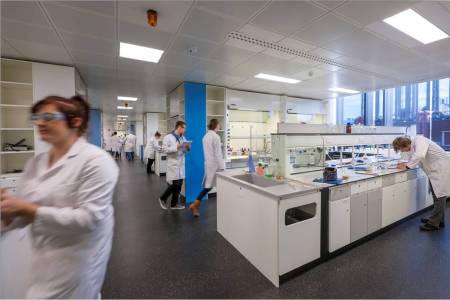 8. Turn up to the lab drunk

One student turned up to the labs still visibly drunk from a previous evening – explaining the lack of an apparent hangover that hadn’t yet kicked in. They then proceeded to wander around the lab doing Jack Sparrow impressions until their lab partner kicked them out and sent them home before the idiot broke something or tried to pick a fight with the senior demonstrator.

9. Fail to understand the purpose of a spreadsheet

You’ve got data. Lots of it, in fact. It all needs the same calculation performed on each point. So, obviously, you type it into Excel, do your formula on the next cell, and drag/copy down. Presto.

Of course, this wasn’t good enough for the geniuses who decided to write each one out on paper, type them into a calculator step by step, then manually type the answer into the spreadsheet. All 150 data points worth over the course of about an hour. The reason, apparently, was that they didn’t trust the computer to get it right.

10. Spill ethylenediamine down their arm and not notice… for half an hour

Ethane-1,2-diamine, ethylenediame, diaminoethane, en, whatever you like to call it, it’s a common ligand that appears everywhere in the theory component of an undergraduate chemistry course. Small wonder, then, that they forget that it’s a strong base, a derivative of ammonia, and will rip your skin off in short order if you don’t do something about it. But at least now I know what a proper ammonia burn looks like. And smells like, to be overly-honest.

This entry was posted in Uncategorized and tagged chemistry, lists, science. Bookmark the permalink.